Irina Lukoshkova works as General Director at the joint-venture KazElektroPrivod since March 2018. Irina was previously Head of Projects Department in Electric Locomotives Assembly Plant (EKZ), another Alstom JV in Kazakhstan.

Irina Lukoshkova has worked for Alstom since 2013 and has significantly contributed to the implementation of project management, sourcing, cost optimisation and localisation processes at EKZ. Irina has extensive experience in the railway industry both in international and in CIS regional business environments. Before moving to Kazakhstan, Irina was responsible for sourcing and procurement activities in tramways assembly plant based in Saint-Petersburg, Russia.

Irina has worked in manufacturing plants since 2010. She graduated with honor Saint Petersburg State University of Economics with a degree in “Production logistics” and “Regional studies (Western European countries)”. 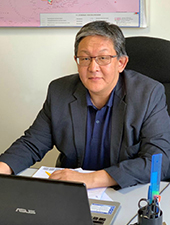 Gani Karmsak works as Financial Director at the joint-venture KazElektroPrivod since May 2017. After getting physico-mathematical education, he started out as a maths teacher in a secondary school. After receiving financial and economic education, he began working in banks of the Republic of Kazakhstan in areas of corporate lending, risks, methodology. His last position occupied in banking structures was the Director of the regional branch of one of the largest banks in the country. 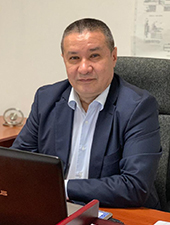 Sergey Kelbakh works as Operations Director at the joint-venture KazElektroPrivod since September 2018. He has more than 25 years of industrial management experience at the largest enterprises of the Republic of Kazakhstan. He has engineering and economic education as well as deep knowledge and professional skills. Sergey is a professional of his craft not only in production, but also in the managerial sphere in the field of machine-building industry.

Within the framework of the project “Organization of the production point machines developed by ALSTOM in Almaty”, approved by the decision of the Investment and Innovation Committee of “Samruk-Kazyna” JSC and recognized as a strategic project by the decision of the Investment Committee of “NC “KTZ” JSC dated June 7, 2013, Alstom and repair corporation Kamkor signed an agreement on the establishment of “JV “KazElektroPrivod” LLP.

Official opening of the plant and assembly site in Almaty.
Start-up of production.
First P80 point machines assembled in KEP were delivered to KTZ.

Start-up of the machining area.
Full-cycle production is set.
First delivery of P80 point machines produced and assembled in KEP.

Optimization of all company functions.
Reinforcement of the image and reputation.

As a promoter of sustainable mobility, Alstom develops and markets systems, equipment and services for the transport sector. Alstom offers a complete range of solutions (from high-speed trains to metros, tramways and e-buses), passenger solutions, customised services (maintenance, modernisation), infrastructure, signalling and digital mobility solutions. Alstom is a world leader in integrated transport systems. The company recorded sales of €8.1 billion and booked €12.1 billion of orders in the 2018/19 fiscal year. Headquartered in France, Alstom is present in over 60 countries and employs 36,300 people.

Main activities of the company:
• Bunkering of marine equipment for production facilities
• Supply and delivery:
Materials for the assembly and operation of marine equipment;
Construction bases of various types of welding materials and welding equipment (ESAB);
Abrasive powder and garnet sand;
Material and technical supply of various types of goods.
• Issuance of waybill and processing of railway cargo at the dead end of “Mangyshlak” station.
• Building and construction work.
• POL storage and logistics.
• Refractory facing.